Roald Dahl was the first favorite author I ever had. Dr. Seuss can’t count because we didn’t get to choose him; he just happened to us. Even though I feel obligated to credit Seuss and his quirky rhymes in some small way for my love of reading, Dahl is the one who really made it happen. He was my literary god and, alongside Norton Juster and his masterpiece The Phantom Tollbooth, the reason I wanted to be a writer.

Naturally, I was a huge fan of the films that adapted Dahl’s books. Of the ones I was familiar with, I loved them all. And I still love them, so many years later. In the face of the release of Steven Spielberg’s adaptation of The BFG, it seemed only right that I think back on (and re-watch) these films and try to rank them.

DISCLAIMER: I use the term “rank” loosely because there’s no movie I didn’t enjoy; if using a 1–10 scale, they’d all rank above a 5. Also, I couldn’t get my hands on the Danny and the Champion of the World movie, nor did I get around to the animated BFG movie, which I didn’t even know existed before this quest!

I’ve never read Fantastic Mr. Fox. I prefer to read the source material before watching a movie 9 times out of to 10, so this was also my first time watching the movie. Going in, I was not aware that this was a Wes Anderson joint; as such, I was a little thrown by the indie nature of it in the beginning. But I can appreciate an indie every now and again, so I was able to adjust. The only thing I could never come around on was how kind of creepy all the animals looked—particularly Ash, the Jason Schwartzman–voiced son of Mr. and Mrs. Fox (George Clooney and Meryl Streep, respectively). I also feel like George Clooney’s voice made it a little hard to suspend my disbelief; I couldn’t get the image of him standing in a recording booth, saying the lines, out of my head.

That being said, I did enjoy the movie. I laughed a lot and really rooted for all the animals to win in the end. But if anyone was anticipating an underfox tale (see what I did there?), unfortunately, this movie just couldn’t top any of the films I was already familiar with. Sorry, Mr. Fox. You just weren’t fantastic enough.

God, this movie is kinda terrifying! But it’s a story about witches who want to rid the world of children; if it wasn’t kind of scary, what would even be the point? So it’s only natural that Anjelica Huston played the Grand High Witch. Just don’t expect the glamorous darkness of her Morticia Addams; this witch’s pretty exterior comes with the help of some very advanced mask work. Despite loving a lot of aspects of this movie, like how closely it adheres to the book, I also had some issues with it.

First of all, though I was kind of amused by it, how exactly was the main character’s grandmother dying from what was described as a “minor case of diabetes”? So many questions about that… Also, I could not stand Bruno, the annoying rich kid who is the first victim of the Grand High Witch’s potion that turns children into mice. He was rude and an idiot, and he described the act of getting off an elevator as “exercise” that he didn’t want to do. Ugh. Finally, the movie ends differently than the book, and while I’m not completely a purist, the ending felt pasted on. This earns The Witches the fifth spot in my ranking. 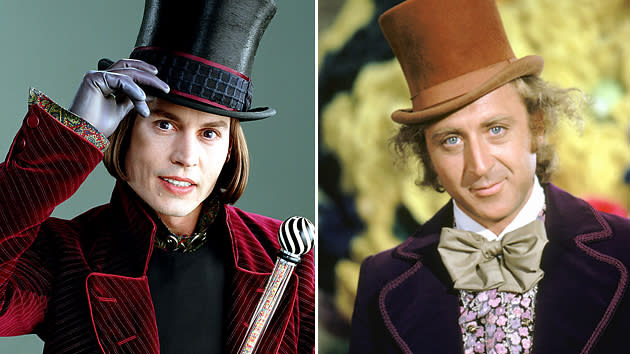 In what I’m sure many a Wonka-lover will call blasphemy, I like the Gene Wilder and Johnny Depp adaptations equally. I certainly understand why people aren’t fans of the Depp-driven Burton film, and I won’t begrudge you your disdain. But I still like it. Where the Wilder flick is whimsical and provides a more delightfully manic Wonka, the Depp picture involves scenes that are more accurate to the book. Plus, despite wanting the REAL Everlasting Gobstoppers instead of the mini-jawbreaker nonsense we were given, I would not eat candy from Wilder’s factory; it was definitely not up to the proper codes and regulations!

Wilder’s movie gains points for “Pure Imagination” but also loses some because does ANYONE like Charlie’s mom’s song? Depp’s gains points for the fabricated Wonka backstory with his dad, which I thought was a plus, and loses them because I have a weird thing against movies being narrated by an actor that then appears in the movie. Beyond that, the Oompa Loompa songs were comparable across the board, and both movies’ Mike Teevees made me equally aggravated. I prefer Freddie Highmore’s Charlie though. In the end, they even out, so I must declare a tie. 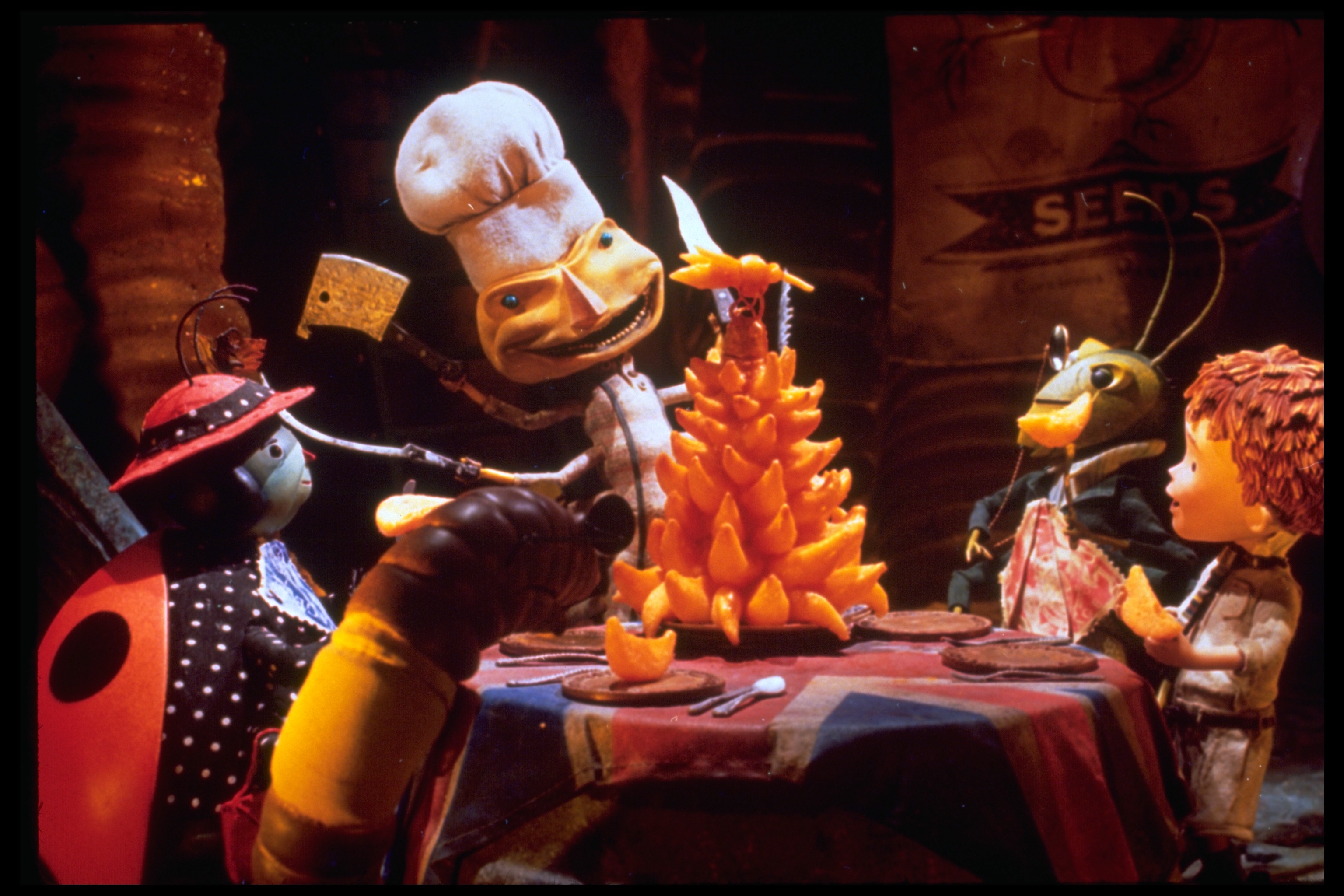 2.) James and the Giant Peach

I love this movie so much. I think James is adorable, and even though I don’t like flying or peaches, I get major fantasy wanderlust from watching it. I also have a lot of memories of watching this movie with my mom and sister—my mom really liked the centipede and would quote him constantly—so it’s extra nostalgia-inducing. Though some (like my husband) find the characters to be a bit over the top, I love everything about this movie. James’s aunts are the perfect amount of scary—much scarier than the storm-cloud rhino that was somehow responsible for the death of James’s parents—the bugs and insects were loveable and amusing, and the animation and songs were top notch. Watching this movie is like watching the animated Anastasia movie: I remember liking it a great deal, and then I watch it and think “Oh my god, this is the greatest thing ever.” Plus there’s the glow worm, who is definitely my favorite character. This movie would be my top pick if it weren’t for . . .

This. Movie. Rules. The book rules as well. I can’t even begin to convey to you how much I wanted to be Matilda. I’d be lying if I said I wasn’t horribly disappointed in myself for not being so smart that my lack of being challenged led to telekinetic abilities. I also blame my parents for actually liking me. Despite all that, I loved Matilda. Here was a major bookworm, just like me, who rose above the crappy situation she was handed to do something amazing. I felt at home reading this book, and watching the movie replicated that. Somehow, its special effects still hold up after 20 years, which goes to show that sometimes simple is best.

This movie is just as entertaining as it was when I was 6. I have changed my opinions on a few things though. For instance, instead of fearing Miss Trunchbull, I think “Okay, how is this woman not in jail, and how in the world did she become principal of a school?” I also now understand what he REALLY means when Danny DeVito’s Mr. Wormwood calls his daughter a “mistake.” Everything—from a toddler Matilda filling a wagon with books from the library to that energy-filled scene where she harnesses her powers to the very end when she and Miss Honey become family—makes this movie, and this book, hold the top spot in my heart. Thank you, Roald Dahl. You may not have liked kids, but I know of one who loved you.

Featured image via The Guardian.